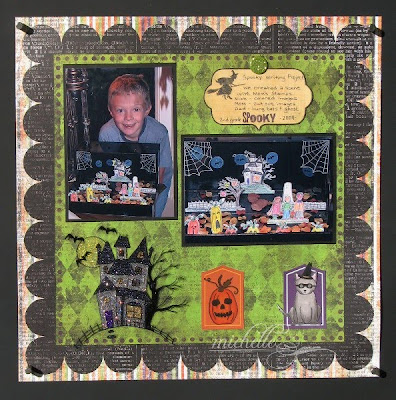 This week's challenge is a Halloween Layout...and I'm sharing a layout I made of a project my 2nd grade son did for school. We don't celebrate Halloween, so I don't have any Halloween photos to scrap, so I'm sharing a layout I did for my son's school album that uses lots of Halloween images available in the store!  He had a ball making this project!
He had to create a scene for a spooky story. He had fun creating a scene with the images from The Rubber Cafe. He did the stamping, colored all of the images and directed the scene. He added a path to the house with landscaping rocks and cut apart some silk flowers I had around for leaves. I helped with cutting the images and dad sprayed the shoebox black and hung the bats and ghost.

We used lots of images from The Rubber Cafe for this project and layout!
~Bat Motel
~Charming Kitty
~Creepy Fence and Tree
~Pumpkin Face Mix-n-Match
~Trick or Treat
~You Need To Dust
DS colored his images with color pencil. I colored mine with Copics and the bat motel I did with the glitter and acetate technique to coordinate with his color scheme. The bats in the shadowbox were stamped on acetate with stazon, punched out and then attached with a glue dot to some glitter paper scraps. We hung the images with fishing line on a bead so we could turn them as needed.

Great layout and your son did a great job on his project.

Ohhh, what a great page. Super fun that the stamps are in the photo and on the layout. What amazing projects!!! Love it!

Nice layout, your son did a great job on his school project.

Oh this is fantastic! I love the spooky box project. You both did a wonderful job! LOVE IT!