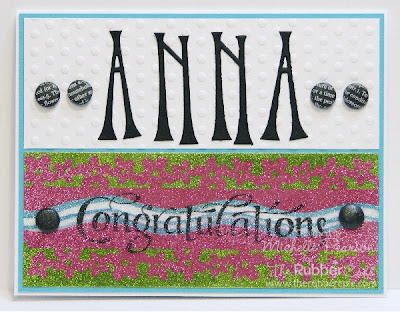 My cards today for The Rubber Cafe are of the blingy sort!  I have no idea what this technique is called....but I'm calling it Glitter Landscaping!  I took a piece of wide Scor Tape and attached it to a piece of white cardstock. 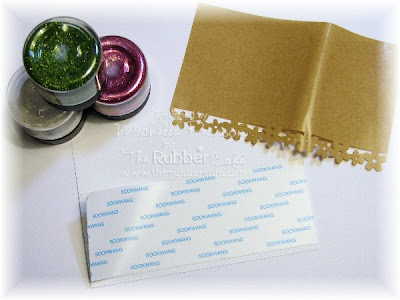 Next I removed the liner.  I punched the flower border on a liner piece. (I used a brown one in my stash so it would show up more in the photos. 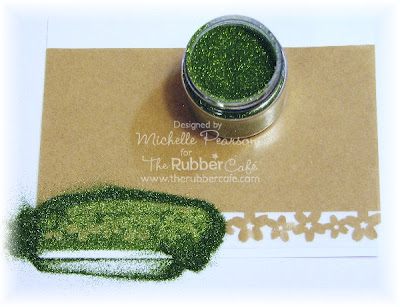 I applied the punched liner back onto the tape leaving a border as desired.  I poured a bit of the You're So Fine glitter out and covered the exposed tape, adding the touch of green for my flowers. 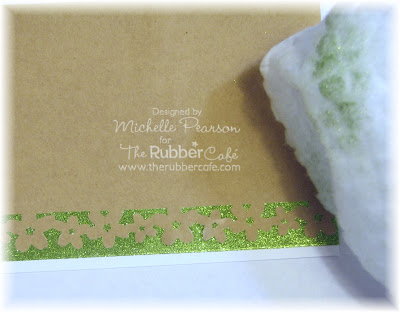 You can use a swiffer to pick up any glitter left on your card panel after you flick it off. 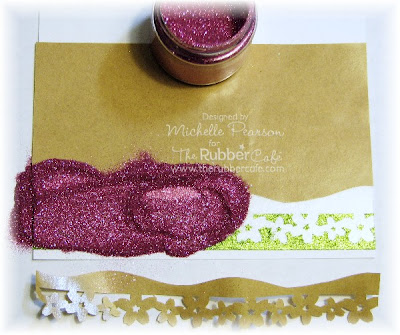 Again, I carefully removed the liner and cut a wavy line as shown.  I reapplied the large liner piece and then added my pink glitter.

I repeated this process as shown on the card photo and landscaped my tape perfectly.  This card is going to a graduate who likes bright colors!

I stamped the sentiment on the glittered panel with Stazon ink and colored it with Copic Markers.
I embellished the card with Candi Embellishments.

For my next card I switched up the glitter and went for a more masculine effect: 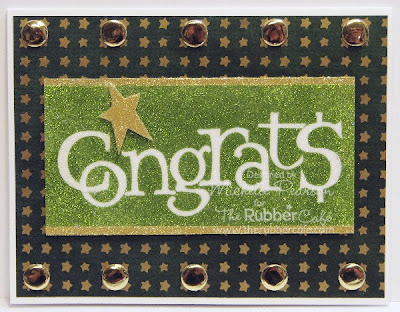 I mounted my tape strip on a piece of white cardstock.  Next I die cut the congrats out of some liner paper and placed it on my tape as well as narrow strips along the edges of my panel.  I glittered the background green, letters white and then edges gold.

I die cut the star and popped it up on foam tape.  Candi finishes this card as well.

I hope you've enjoyed this mini tutorial...the focus is entirely on the awesome You're So Fine Glitters!  This technique reminds me of the colored sand in jars I admired as a child!

Email ThisBlogThis!Share to TwitterShare to FacebookShare to Pinterest
Labels: Candi embellishments, Michelle, you're so fine glitter

Fun tutorial Michelle! Great idea and use of the glitters.

Nice blog. Enjoyed reading and doing it. We, Edmonton landscaping company got a lot of ideas and designs that we can implement. Thank you.